Three groups of whin bush have been removed on the right hand side. The first bunker which was seldom used has been filled in and made into a little mound which will border the fairway line.

A new right hand side fairway bunker has been built further down the fairway 245 yards from the back of the white tee.

The whins up the left for the first 220 yards have been cut and burnt. 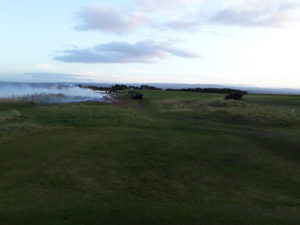 Then we dug out the whin stumps and roots with an excavator and created some dune like mounding on the beach side. Next step was to dig out down into the sand and create a sand scrape and cover the mounding with a good layer of sand. Hundreds of Marram grass clumps have been dug into the mounding and it is hoped that these will establish and thicken out over time and help keep the sand in place. They are quite tussocky at the minute but over time and when some trampling takes place then they will settle down and become more cropped like. We hope to keep the sand scraped area as open sand and it will require a little maintenance from time to time in weed and gorse treating. As it is not a hazard it will be play the ball as it lies, ground your club etc. We will have the mounded areas as GUR for a few months but the fairway side of the new scrape will come into play early season.

Lately we have started the work on this hole to enlarge the fairway landing area and discourage golfers aiming up the 16th hole for safety reasons. The old bunkers are to be filled in and two new ones created further on and to the left.

We hope to get these bunkers finished by mid January and then tackle the whins on the bank once any poorer weather comes in.