Two new bunkers to the left side rough have replaced the original bunkers with the view to giving a wider and bigger landing area to the majority of golfers.  We have cut the whins back on the right side bank and once removed and returned to grass will offer a much less intimidating direct line tee shot.

We are in the process of re painting the viewing steps at the 17th tee with a sign asking playing partners to observe the top fairways are clear before safely teeing off.

The greens were 3/8″ hollow cored at the end of February to remove some organic matter in the top 40mm. This was followed up with a slender 6mm pencil tine down to 7″. Hopefully this will alleviate the unsightly superficial fairy ring disorder which is prevalent on some greens. Subsequently we have sand dressed the greens 3 times and added a Calcium and magnesium prill and lately a Spring feed to help kick start some growth. 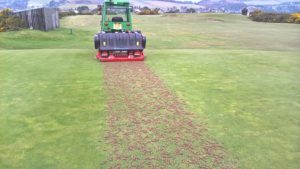 We still have the first ‘Revolution’ wetting agent of the year to go on which will help with soil moisture retention in the rootzone.

A sure sign of aeration holes not filling in is due to the presence of Leatherjacket grubs eating away at the roots of the grass plant. Unfortunately there is no chemical control for these grubs any longer and it is going to become a problem for many courses especially in the Spring time when we are trying to promote surface levels on the greens. 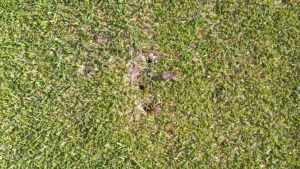 TIS irrigation installers arrived late January to some snowy weather and then a glorious February allowed work to progress at good pace. 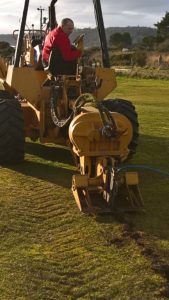 All 90mm MDPE ring main pipe and 63mm going to the greens and tees were vibratory mole ploughed into the ground to 600mm deep. The soil underneath is very stoney to say the least and several sections of the old original 1″ steel irrigation line got unearthed. During March all the 50mm pipe and Valve in head sprinklers were installed around the greens and positioned a little further out so that the aprons can receive irrigation also. Recently the tees sprinklers have been going in and all our old greens sprinklers have been re used to save some money. These are being set in down either side of the tees to allow accurate watering of the tees themselves and also taking account of heavily walked areas by the tees. At this date there are still 5 tees and the lower putting green to complete, the new tank to erect and a new variable speed pump to go into the pumphouse. All going well once electrical and softwear work is tested, the pipe lines and sprinklers flushed and primed we are looking at around a mid April completion.