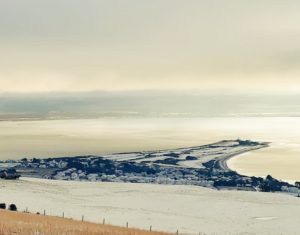 That’s us back onto the summer course with preferred lies on the fairways back in operation. Thank you to the members who have used their mats throughout the winter months which has helped reduce the level of damage to the semi roughs. The level of play the course has received this winter has been quite exceptional apart from the week of rest in early February from the snow fall and it was great to see all the kids out enjoying some sledging at the 17th.

Minus temperatures since the start of January up until Mid February and this combined with staff furloughs meant some of our bunker repair work didn’t get completed. The ones we have revetted are back in play now. We have cut some more whin bushes down at the 13th and taken them away at the right of the 18th green which has been seeded this week. GUR for a while here.

Work on the greens has seen an application of Iron and magnesium followed by a double verti-cut to remove some moss which is quite prevalent this year. An initial sanding and pencil tine to 6″ deep was done early March and another sand dressing and a spring fertiliser will go on next week. Just for comparison we have only cut the greens four times this year with very little grass coming off  compared to five times last January alone. We are still cutting at 5.5mm and this will come down slowly as sand is incorporated and any holes and imperfections fill in.

The summer tees have been scarified to 1″ deep and heavily sanded which is aimed at reducing some of the softer growth, invigorating some new growth 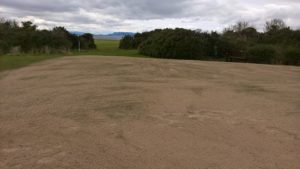 and firming the surfaces up. An Iron and Ammonia spray has gone on last week and a granular feed and wetting agent is planned next.

Our fairways have also been sprayed with Iron and Ammonia to deter the moss and stimulate a little spring growth and boost colour. We have sanded the approaches and  green surrounds to aid a little recovery from footfall. I would like to do most of the fairways but cost is a limiting factor with a 20 tonne load of sand costing £600!  Leatherjackets are going to be a big concern this year not just from birds overturning divots but the effect the grubs have on the grass plants root system. A nibbled and shortened root will die much quicker under stress from heat or dry weather and last years Autumn plague on the fairways is a very bad sign. We have a wetting agent ready to go on when the next spell of soft weather comes along. This will help water be drawn through the turf and bind onto soil particles which in turn enables the soil to re hydrate during times of rainfall. 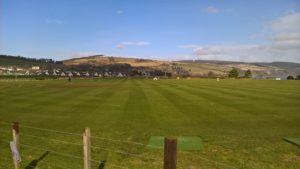 The range got its first cut this week and is looking great. The downside is that it took almost 2 hours to rake up all the divots and collect golf balls before it could get cut. This is time we can ill afford with a small team of four greenstaff. It would help us greatly if the mats provided could be used or if hitting from the grass then a couple of minutes spent replacing your divots after would be greatly appreciated. Can I remind also that no iron play from behind the main mat and please do not leave divots sprayed over any of the small greens on the range. Thank you.

Our long roughs have been cut and collected last week and this helps reduce the nutrient going back into the soil which favours ranker grass such as Yorkshire Fog and Rye grass. We annually spray with a herbicide now which will selectively treat these courser grasses with a view to encouraging the finer Bents and Fescues. When the  longer roughs mature into full seed it is such a lovely sight (and hazard!) although could we ask any buggy users to draw up alongside and walk into the rough to find their ball.

With the season about to stutter to a start and having no bunker rakes out yet it would be nice for everyone who goes into a bunker to smooth the sand over with the sole of your shoe. Remembering a lift and place within 6″ is still in place until rakes are returned for use.

Volunteer work – if any of our members who have some spare time would like to give the course a hand it would be greatly appreciated. We have a list of jobs from divot collecting and filling, litter picking and various painting jobs. Contact myself or Mike for info. Following on from last years successful members divotting evenings we would like to do this again and dates will follow. Thank you to all who give up their time.